BRISBANE, Australia – Cloudscene, the world’s largest directory of colocation data centers, cloud service providers and network fabrics, has released the results of the Q4, 2017 Data Center Operator Leaderboard, and revealed the Fast 50 Markets to Colocate in 2018.

For the fourth consecutive quarter, Equinix has dominated all leaderboard regions, retaining the number one position across the North America, EMEA, Oceania and Asia markets.

The colocation giant demonstrated its strength throughout the 2017 year, with Equinix’s overall leaderboard score growing 9.04% from Q1 to Q4, 2017.

Second-placed Interxion also grew significantly, with a 24.67% increase in their EMEA leaderboard score since Q1, 2017.

The final leaderboard for 2017 resulted in considerable movement due to the introduction of new eligibility criteria, which requires all leaderboard entrants to be carrier-neutral data center operators.

Serial tech entrepreneur and Cloudscene’s founder, Bevan Slattery said: “Carrier neutrality is an area that continues to be of critical consideration in the colocation decision-making process. We need to focus on and celebrate data center operators and facilities that embrace customer and carrier access on a non-discriminatory basis.

“Discussions with key members of the industry led to Cloudscene’s decision to only accept carrier-neutral operators for our quarterly leaderboard, while leaving the Cloudscene directory listings completely open and available to all operators.”

The change has resulted in the exclusion of a small number of operators, which has paved the way for new carrier-neutral entrants.

“Industry feedback regarding carrier neutrality has led to the removal of SUNeVision’s Mega-i and Mega Plus facilities in Hong Kong and all PIPE Networks and AAPT facilities for Q4, 2017, affecting Cloudscene’s Oceania and Asia leaderboards,” said Bevan.

Selected from a pool of more than 5,800 service providers listed on Cloudscene, the results for Q4, 2017* are as follows: 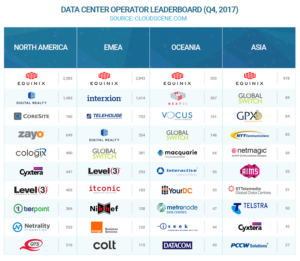